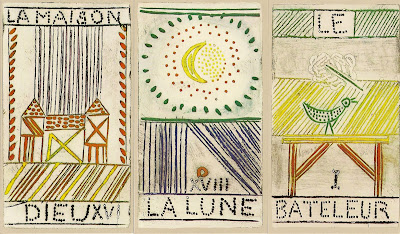 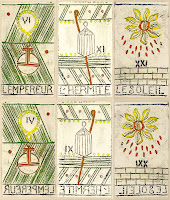 Notes:
Louttre B is the pseudonym of the French painter Marc-Antoine Bissiere (1926-2012). The deck was published in 1981 by Musee des Arts Decoratifs in cooperation with Grimaud on the opening of an exhibition called "Antique Playing Cards - A Collectors Dream". The cards originally were part of a book called "Le Tarot des familles", which was printed in a limited edition of only 75 copies. The book contains hand painted engravings of the cards with explanations.

The deck shows no human figures, but only the objects taken from Tarot de Marseilles. The images of this deck play with symmetry in various aspects. The three cards, where the symmetry of Roman numbers allows it, have mirror-inverted images. That leads to the first impression, that both The Emperor and The Lovers have number VI and Sun and Fool both have number XXI. 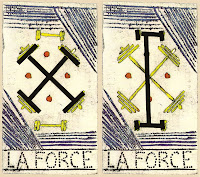 La Force (Strength) has no explicit number, but the number XI is part of the image.

Card titles are in French. The suits are d'Epee, Baton, Coupe, and Deniers. The courts are Valet, Cavalier, Reine, and Roi.  The backs are reversible. The 78 cards plus titlecard and a French only lwb came in a lidded cardboard box.
Eingestellt von eno um 23:12