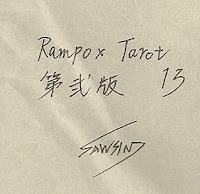 Notes:
Sawsin (as he refers to himself), created the original set of tarot prints for an art exhibit in November 2011. He also made 18 signed and numbered copies of a deck of the images, all of which sold out at the exhibit. He then created a second edition of 18 with a different card back image and title card which he offered on his blog. Mine is no 13 of the second edition.