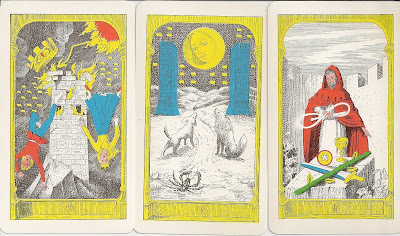 Notes:
Berrill— the founder of the MENSA organization — based the deck on the legend that tarot was a remnant of secret societies that once existed in Fez, Morocco.

The deck was originally published in a limited and numbered edition of 500, but both Berrill and the artist died before they could be distributed. Around 1970 the decks were picked up and marketed by Rigel Press, Ltd. Later, U.S. Games and AGMueller published a non-limited edition (ca. 1975) that remained in print for a number of years.

Each suit reveals a story, depicted in scenes from King to ace (the same as in the Raider Waite).