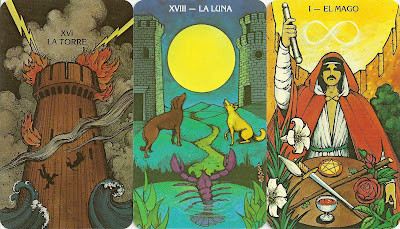 Notes:
Originally published by Morgan Press in 1979, the deck was later published by U.S. Games Systems. There is a separate card with the deck that states that it was illustrated by Bill Greer, under the direction of Lloyd Morgan. The symbolism used is a combination of the systems developed by Arthur Edward Waite and Paul Foster Case.

Rather than paint full scenes as did Smith, Greer chooses to paint from a closer perspective. Many of the people shown in the cards are androgynous, the Pages can represent a girl or boy equally well.

This is the Spanish Edition 1993. The titles on the cards and the LWB are Spanish only. It came with two extra cards, the above mentioned titlecard and a card with biographical information on Bill Greer. The card backs are light blue with white stars and - other than the first edition - all cards have identical backs.
Eingestellt von eno um 08:09