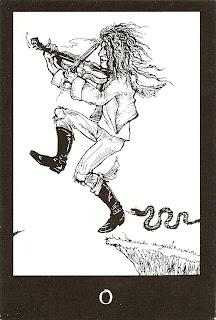 Notes:
The deck was originally titled, 'The Bohemian Tarot' and the Major and Minor Arcana sets were published seperately as A5 limited-edition (100 copies) folios around 1991 ( as 'Tribal Tarot' in Encyclopedia of Tarot, vol. IV, pp. 195-196).

The 2001 Limited Edition, the completed 'BOOK of ChAOS Tarot Deck' , was published as a whole. The 111 copies sold within 6 months. The title changed from the 'ChAOS' of that edition to the 'KAOS' in the 2004 edition.

From the first edition 1991 to the 2004 edition about half of the major arcana have been redrawn, while most of the minors remain unchanged.

There are actually 24 major arcana cards, as there are two differing Lovers cards, and two Devil cards, one with Pan and one with Baphomet. Some titles of the Majors have been altered to a more Thoth-like titling
Eingestellt von eno um 04:05