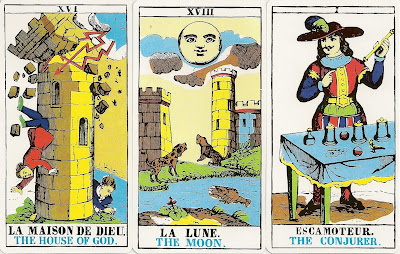 Notes:
This is a reprint of the Tarot d'Epinal originally published in France by Pellerin during the nineteenth century. These packs were inexpensively printed for popular distribution.

Epinal is a city in France, a former center of the print industry. The expression: "Une image d'Épinal" is used to describe something (picture or situation) with a typical "traditional" taste or where only "nice" and "good" things are shown.

It has Juno and Jupiter instead of Pape and Papesse and an extra card called "The Consultant". Emperor and Empress are unnumbered.

This Version is edited by J.M. Simon from Grimaud and has extra english titles, which the reprint from Arts et Lettres 1976, that is printed in Encyclopedia of Tarot vol. I, does not have.