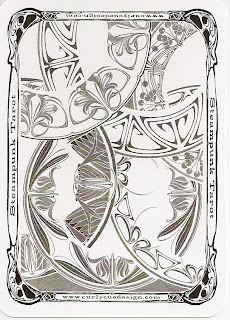 Traditional symbolism associated with the Tarot can be found in the cards . The cards have standard Tarot titles with Strength being card 8 and Justice card 11 (following the Waite-Smith model). The Major Arcana numbering system does not use Roman numerals. The 4 suits are the familiar wands, cups, swords and pentacles and the court cards are page, knight, queen and king.
Eingestellt von eno um 00:35