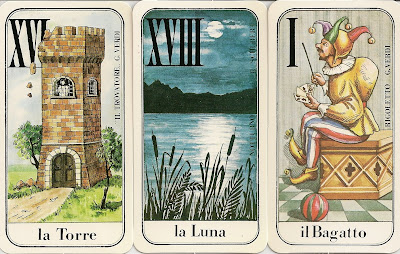 Notes:
The Tarocco della Musica  was created by Osvaldo Menegazzi, in consultation with Paola Maino and with the collaboration of Giovannino Scarsato. The card titles are in Italian. Each of the characters or scenes in the Trump cards is an illustration of a scene from an opera which illustrates the meaning of the corresponding card. Along the side of the image is the Italian name of the opera and the composer.

The court cards are Fante/Page, Cavallo/Knight, Donna/Lady and Re/King. The Donna, Cavallo and Fante depict people playing instruments, while the Kings each show a famous opera house. For the minor arcana aces, a composer is posing with his instrument. The rest of the Pips are represented by a corresponding musical instrument.
Eingestellt von eno um 06:53