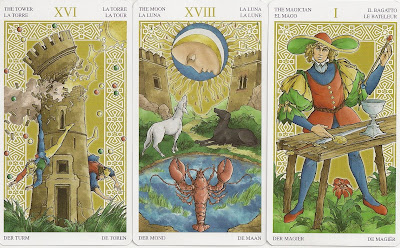 Notes:
Berti and Palumbo take the classic Wirth images, rendering the majors in an updated style, and adding the 56 Minor Arcana. Wirth never thought of drawing the 56 Minor Arcana, because he considered these cards have been unduly added to the Tarot deck by printers who knew little about esoteric doctrines.

In spite of the absence of direct references in Wirth's writing Berti and Palumbo thought it is possible to create a "harmonic hybrid" that unites the 22 Major Arcana of Oswald Wirth with the 56 Minor Arcana of Eudes Picard.

Picard, a contemporary author, had printed a "Manual synthetique et practique de Tarot" in Paris 1909, which reflected hermetic-alchemistic doctrines that were shared by Wirth.

Despite being french, Picard was interested especially in the history of Spanish tarots, thus pentacles are associated with earth, swords are water, cups are air and wands are fire.

An essay on the Minor Arcana by Eudes Picard, appears in The Encyclopedia of Occult Sciences, which was published anonymously in English in 1939.In this article on Tarot from the Encyclopedia of Occult Sciences, Picard's section is illustrated with the Minor Arcana from the Etteilla Tarot, although the descriptions make it clear that what he was writing about was acutally a deck much like El Gran Tarot Esoterico.