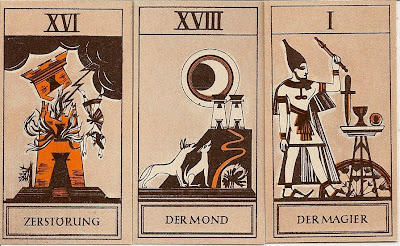 Notes:
The first edition of the cards was printed 1949 in Berlin, these cards were of larger size than the following editions and came without or with a shorter version of the book. Unfortunately I do not own the 1949 edition. The Editions from 1954 and 1962, which are in my collection, have smaller cards and accompany a book by Joachim Winckelmann.

The 1949 and the 1962 editions are mentioned in Kaplans Encyclopedia of Tarot. They are not "privately printed" by a Mr. Schikowski, as Kaplan assumed, Schikowski Verlag was a well known German publisher for occult books. The cards were designed by Erich and Liesel Mutze, Wickelmann wrote only the book.

The cards bear Egyptian features with Roman numerals at the top and German titles at the bottom of each card.

The symbolism largely follows the Marseille tradition, some of the cards are renamed. 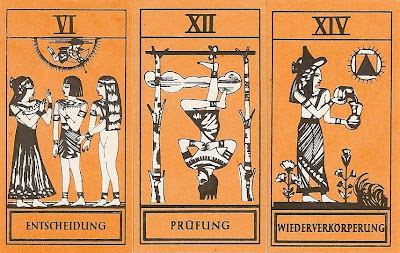 The design of the cards is possibly inspired by a 1931 book from Woldemar von Uxkull titled "Die Einweihung im alten Ägypten" which has 22 very similiar pictures: 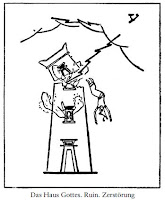 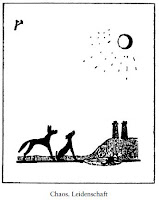 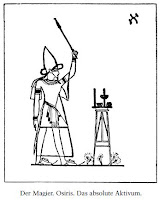 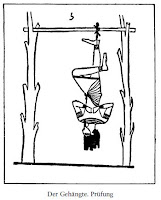