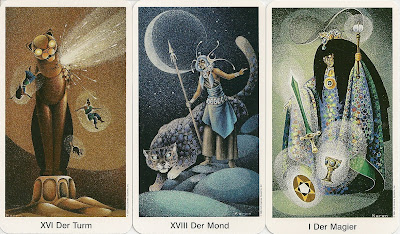 The deck is set in a fantasy world divided into five kingdoms. Vapala , the diamond kingdom, is the Major Arcana. Its people are called the Sky People. The suit of swords is Thnossis, the ruby kingdom, home of the Fire People. Twahihic, suit of wands, is the Emerald Kingdom, home of the Sand People. Azenghir, suit of cups, the Topaz Kingdom, is home to the Salt People.

The card images have influences from both Marseilles and RWS patterns.
Eingestellt von eno um 11:56