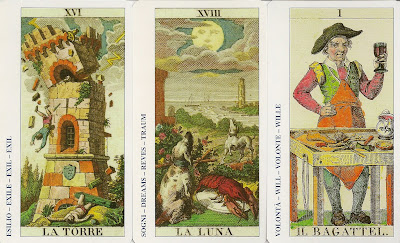 Ferdinand Gumppenberg was trained in German print shops before immigrating to Milan in 1809, he was able to introduce the German tradition of commissioning decks from well-known illustrators and engravers. In 1835 he commissioned a deck from the engraver Carlo Dellarocca. As the most elegant and refined Italian deck of its time, it quickly became known as i tarocchi sopraffini, the super-fine tarot.

Dellarocca was a highly regarded Milanese engraver/illustrator who learned his craft from Giuseppe Longhi, a prominent engraver and professor of art. Dellarocca was not as famous as his teacher, so his life has not been well documented. His birth date is unknown, most references say he died some time after 1824, so it’s possible that the plates he engraved for his tarot cards were not used until after his death.

The pip cards are delicate and refined. The court cards conform to tradition, but they have more individuality and personality than most decks. The tax stamp and Gumppenberg’s and Dellarocca’s names are on the King of Rods card. The tax stamp shows the steel crown of Lombardy and the crown of Holy Roman Emperor Rudolf I, symbols of the Austrian Empire, which ruled Lombardy at the time. The initials "F.I." stand for Franz I, Austrian ruler. "C.70" is 70 centesimi, the rate at which the deck was taxed. The tax stamp was valid from November 1, 1823, to January 26, 1840.

There are several unique features of Dellarocca’s deck design: The Bagatto is a cobbler standing in front of a work table strewn with the tools of his trade. There’s a jug on the table and the cobbler hoists a large glass of wine. The Lover stands between his sweetheart and a king who rests his hand on his shoulder. The young man’s clothing announces his divided loyalties. He wears tights and pouffy pants, but also a helmet and armored corselet. He seems to be torn between love and duty.

Justice’s body is tilted slightly, as is her sword and scales. She has an eye in the center of her collar.The Hermit carries a little open flame in a holder instead of a lantern.The Strength card is more dynamic than the traditional Tarot de Marseilles image. The woman straddles the lion with a fierce expression on her face. One of her bare feet presses down on the lion’s back. The lion’s front leg is raised and he is resisting her efforts to pry his jaws open.

The skeleton on the Death card is sweeping up symbols of human pride and vanity like jewelry, a bishop’s miter, books, artist’s palette, weapons, and medals. The card is not labeled to avoid using the word “Death”.The Devil card has several symbols commonly associated with him: the trident, ass’s ears, snaky hair, a furry skirt, clawed feet, monsters and hell fire.

The Moon retains the towers and dogs from the TdM, but the scene is an estuary and one of the towers is a lighthouse. The dogs seem to be in a walled garden, and a boiled lobster rests on a large silver platter on the ground.On the Sun card, a carefree young couple dances in a walled garden under a bright sun that is burning away the last of the clouds.
Eingestellt von eno um 19:24