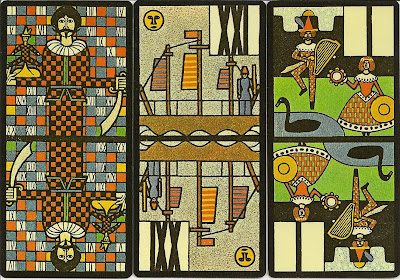 Notes:
The original edition of these cards appeared in 1906. The designs were by Ditha Moser, Albert Berger was the printer and Josef Glanz was responsible for the production of the cards. It is unclear how many copies were printed: some sources give the number as 300, others as only 100. Around 1910 Piatnik took over the company of Josef Glanz together with its remainder stocks of playing cards. In 1970 when a catalogue was made of Piatniks archives they duscovered unsold copies, which prompted the present editor to reprint the Jugendstil Tarock and issue them 1972 in limited edition.

A second limited edition was published in 1982.

The number of copies each edition is undocumented. Mine is number 2850 of the 1982 edition. Many of the cards show Ditha Moser's childhood impressions, for instance wooden toy figures from the Erzgebirge. Combined with these are traditional tarock motifs.

The court cards of Hearts are dressed in the fashion of the age of Luis XVI, the Diamond Court cards are clad in ancient Egyptian style, the Spades court cards are wearing clothes which belong to the Edda sagas and all the Club court cards appear as crusading knights.
Eingestellt von eno um 17:43