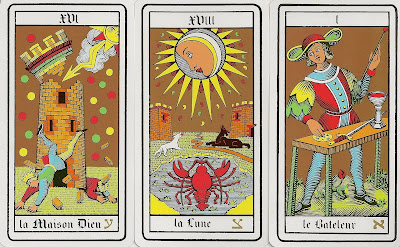 Notes:
Oswald Wirth was a Swiss occultist and kabbalist (1860-1943). He drew his first version of the 22 major arcana cards in 1889, basing them on the Tarot of Marseilles and other decks of the time. These cards were used to illustrate Le Tarot des Bohemiens by Papus. Wirth redrew his cards shortly thereafter, but the revised deck was not published until 1926 along with a book on the cards called Le Tarot des imagiers du moyen-age in 1927.

This rendition of Oswald Wirth's majors, included with a French Canadian edition of Wirth's book Le Tarot: des Imagiers du Moyen Age was first published in 1966 and in many editions since then. Mine is a 2006 photoreprint of the edition Sand 1984 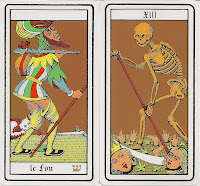 The style is similar to that of the Marseille, with some changes Wirth made based on the writings of Eliphas Levi. Each card except Death has a Hebrew letter in the lower right corner, but Wirth does not use the Golden Dawn assignments. In Wirth’s system Aleph is assigned to The Magician, vice The Fool. The letters continue to be assigned in order until card 20. Wirth then assigns Shin to The Fool and Tau to The World. Death does not have a name or Hebrew letter on the bottom, though it is numbered 13 the top. There are very few Tarot writers who use this assignment of the Hebrew letters ( Wirth's Tarot of the Magicians, Papus' Tarot of the Bohemians, Mouni Sadhu's The Tarot and Elisabeth Haich's Wisdom of the Tarot )
Eingestellt von eno um 14:42