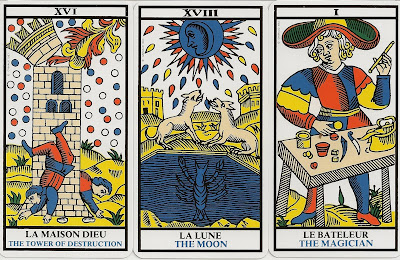 Marteau made a few minimal corrections on some details of the line drawings and changed the Juno and Jupiter cards to Papesse and Pape. The images for pape and papesse came from the Camoin-Conver pictures. He replaced the colours with others closely resembling those of the 1880 Camoin-Conver deck and gave his creation the name "Ancien Tarot de Marseille".

The "Ancient Tarot de Marseilles" is not a reproduction of a historical deck that once disappeared, it can be regarded as a deck in print since 1891.

There are many little variations over the period from 1930 until today from which one can derive the year of publication (Coredil listed them on Aeclectic Tarot Forum). For e.g. the 1930 edition has 3 fleurs de Lys on the 4 of cups where later editions have the tulip, it has no dice on the table of the Bateleur but two red circles .

My version corresponds to type Deck11 in coredils list:

All cards have a copyright © GRIMAUD 1963, French and English titles,
background color white

, red box with L'AMOUREUX on both sides
LWB: French and English
Copyright on the LWB: J.- M. Simon 1977
it has the usual blue pattern cardback
The deck came with 2 advertising cards.

In order to get enough space on the cards for the bilingual titles, the pictures have been changed. For example La Justice doesn't stay anymore on a ground, the lion in La Force looses his leg, Le Pendu is smaller and thiner, the sword of Le Diable has been shorten, the twins in Le soleil are much nearer to the sun, Le Monde and her guirlande are smaller, but the other figure did not change .
Eingestellt von eno um 05:01