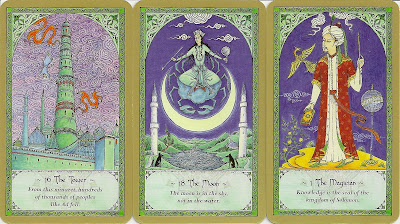 Notes:
The Rumi Tarot has a traditional structure: 78 cards, traditional titles (with exception of the High Priestess, which becomes the Priestess, and Strength which becomes Fortitude), the four suits are entitled Swords, Cups, Staves and Coins, with the Court cards entitled King, Queen, Knight and Page. The minor arcana show a mix of both pip styling and small RWS-like scenes.

The images are based on Rumi and Sufi beliefs, some of the features of the Rumi Tarot court cards are taken from the fifteenth-century cards of Mamluk design. Each card  has a verse from Rumi at the bottom.

The suits of the Minor Arcana symbolize the four Aristotelian elements and are corresponding to the alchemical mysteries of the Sufi path.  The basic positioning of the Trump figures and elements looks like in RWS Tarots, but everything from costume to architecture is Arabic.

The original paintings for the cards, done in tempera, are the same size as the cards themselves, also for the Minors, done in miniature portrait style.  The background color for the Major Arcana is blue, for the Minor Arcana and Court Cards it is green.

The box set comes with the 312 page companion book and a black organdy pouch. The book gives some history and background on Rumi and Sufism, offers a complete guide to the Tarot’s divinatory meanings, and also associates one of the 99 names of God with each card.
Eingestellt von eno um 22:27