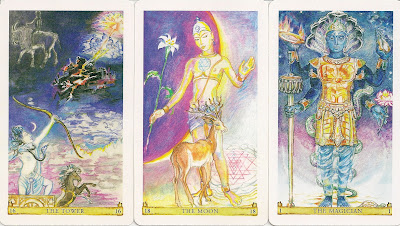 Notes:
Rohit Arya works and writes in India, and Jane Adams is an artist in the UK; they started to work on the project in 2001, exchanging images and ideas by email.

The Sacred India Tarot combines Tarot and Indian mythology. The Major Arcana depict the archetypal forms of the gods and goddesses of India. Initially, the project was called the Hindu mythology, Tarot, but the name was changed because the cards also draw plenty of Jainism and Buddhism.

The Suit of Staves (Wands) is inspired by the Indian epic Ramayana. The love story of  Shiva and Parvati is shown in the suit of Lotusses (Cups). The Suit of Arrows, based on themes from the Bheeshma episode of the Mahabharata. The author uses arrows instead of swords, because Indian myth is primarily an archer culture, swordsmanship being mythically of no account. The Suit of Disks (Pentacles) depict scenes from the life of the Buddha.


The allocation of the elements to the Cards in the Sacred India Tarot is:

The deck comes with 4 extra cards. There are two "blessings" cards called Ganesha and Babaji and there are alternative death and world cards.  The accompanying book provides information on the background of the Indian gods and goddess forms. The cards are in a box in the insert, which contains an image of Babaji, which can be pulled out and used as an altar.
Eingestellt von eno um 11:19