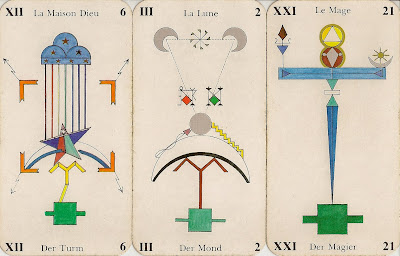 Notes:
Frédéric Lionel was a prolific writer on philosophical and esoteric subjects. His  cards were originally published in 1980 by the French publishing house Editions du Rocher to accompany the book Le Tarot Magique. In 1982, the German publisher Aurum issued the cards with a German edition of Lionel 's book, entitled Das Spiel der Spiele: Tarot.

Most of the cards have the conventional titles (exeptions are The Divine Mistress / The Master instead of High Priestess / Hierophant and Serenity replacing Strength).The artwork is abstract and geometrical, consisting of line drawings with some regions coloured with watercolour.

The images as a composition look like the sigils found in magical manuscripts. They are constructed from various elements. There are a number of Egyptian images, like the eye of Ra or the Ankh, also appearing are the Chinese Ying-Yang, astrological signs, constellations and planets.The design of each card represents an abstraction of the idea of each arcana.
Eingestellt von eno um 23:00