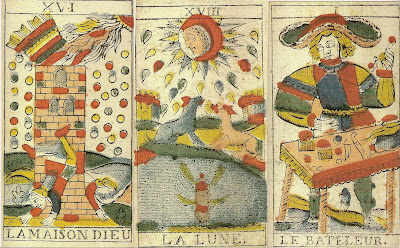 The Marseilles pattern was produced not only in France but also in Fribourg and Neuchatel, Switzerland. This is a reproduction of the Swiss Marselles-pattern Tarot deck that was originally printed in Switzerland in 1804. It is an intermediate in style between the Marseilles and the Besancon patterns. This deck is an ancestor of those by Gassmann and Müller ("Tarot Classic").

One theory on the creator of this deck is, that the deck that had a second engraver engraving over the original. The signiature of the original creator on the Two of Coins was scratched out and another name put on instead on La Force and Le Diable.

On La Force and Le Diable we can read "Engraved by Jean Proche", on Le Charior we found "J R", also on the Two of Coupes and the Four of Deniers. On the Two of Deniers the name of the supposed original cardmaker is mostly erased. "FAIT PAR JACQUE ROCHIAS FILS A NEUCHATEL" is a clear possibility.

The Hanged Man is similar to the Hanged Man from the Catelin Geofroy deck made in Lyon in 1557. The deck has a mis-titled card: The Cavallier De Coupe is actually the Knight of Pentacles. On L Empereur is the coat of arms of the principality of Neuchâtel.

The deck is republished by Il Meneghello in a limited edition of 2000 copies. It comes in a sturdy box with a lift-off lid and a wax seal. Mine is number 284.