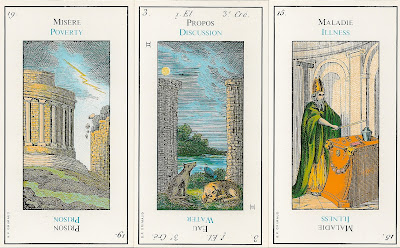 Notes:
Etteilla was the pseudonym of the french occultist Jean-Baptiste Alliette (1738 – 1791). In around 1770, he had created the Petit Etteilla, a cartomantic divinatory deck based on playing cards for the French card game piquet (32+1 cards). The Grand Etteilla was a purpose-built divinatory tarot deck designed by Etteilla around 1788. It was Etteilla's own deck, he did not publish any tarot decks during his lifetime, but some of the card images were used as illustrations in Etteilla's books on tarot. This type is referred to by card historians as Grand Etteilla I

The first known variant of Grand Etteilla I appeared in 1826, published by Pierre Mongie l'aine, an important Parisian bookseller and publisher. This deck was packaged in a green original box that has a label reading Le Grand Jeu de Cartes Soixtante-Dix-Huit Tarots, pour Dire La Bonne Aventure. L'Art de tirer les Cartes et les Tarots, ou l'explication de ce jeu, est en I vol. in-18, et coute 3 fr. pris a Paris, et  3 fr. 50 c. franc de port, chez Mongie aine, libraire, Boulevard Italien, No. 10. The hand colored cards show the same design as this Grimaud deck, except that there is no sun on card 1 and the figure on 14 Force Majeur are nude on this deck and clothed on the Grimaud deck. The 1826 version has blank backs.

Like the Tarot de Marseille Etteilla’s deck has twenty-two Major Arcana and fifty-six Minor Arcana. But, aiming to restore the purported ancient Egyptian elements, Etteilla reinterpreted the Majors; he re-ordered them and often applied radically innovative iconography and new names. He did so in part because, as he explained in his book, the first seven Trumps should depict a creation myth. In addition, Etteilla first publicly assigned the zodiacal signs and Four Elements to selected cards. The Minors were also redesigned, but the changes were far less radical than with the Majors.