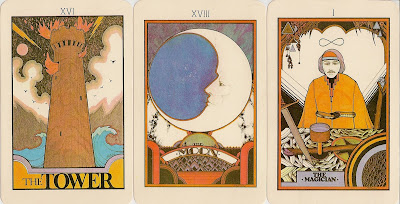 Notes:
The Aquarian decks by Morgan have cardbacks with different shades of red (or blue). They all came in the black box with the Fool on the cover, but there are several variations of the cardbacks: 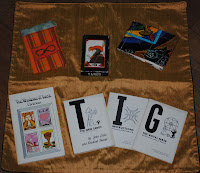 The Aquarian is a "traditional" deck, consisting of 78 cards, 22 in the Major Arcana and 56 in the Minor Arcana, divided into four suits : Cups, Swords, Pentacles, and Rods. There is a white border around the cards. In the majors the card title is worked, often elaborately, into the design and a Roman numeral tops each card. The minors are titled at the bottom of each card.

My Morgan-Aquarian came with a lot of extras, which in principle belong to another deck (The New Tarot for the Aquarian Age): the Windows of Tarot book, Royal Maze poster, The book T- Age of Aquarius, the Book G- The Royal Maze and an Instruction book. It also has an additional  smaller LWB  and  a custom bag.

Since 1975 the Aquarian is produced by  US Games, in their version  the cards shifted a bit in color tones and the box changed to the tuck box.The US Games Version has the blue and white backs only.