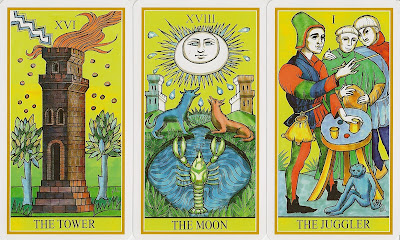 Notes:
Paul Huson is the author of Mystical Origins of the Tarot. Dame Fortune's Wheel  is a historic style deck with scenic pips, but not a Tarot de Marseilles with RWS-illustrated minors. Huson mixed Marseilles inspired iconography with Etteilla's 18th century cartomantic tradition.There are no cabbalistic and few astrological associations on the cards. The Hanged Man, Death, Justice, and a few others, are derived from the 15th Century Gringoneur deck. Other images are related to medieval mystery plays such as the Dance of Death and to historical and allegorical figures like pope Joan and Judas Iscariot. Justice is VIII and Fortitude is XI, its The Female Pope and not the High Priestess, The Fool is unnumbered and Death unnamed.

The four cardinal virtues are also part of the Majors. Three of the cardinal virtues are named, the fourth, Prudence, is represented by trump XXI The World, where it is illustrated with an image based upon the 15th century Este design in which the figure of Prudence stands upon the material world holding mirror and snake. The backgrounds of the Majors are green and yellow.

The elemental associations of the suits were acknowledged in the colour coding. Coins are green, Cups are a dark indigo, Swords are orange and Batons sky blue. Other than these thematic colours the elements seem to play little part in the design of the cards; instead the meaning and symbology follows almost entirely  Etteilla's  interpretations. The court cards (except the Knights) have -according to the French playing card tradition-  names and personalities from history or legend : Hector as Knave of Batons, Pallas as Queen of Swords etc. Kings and Queens are enthroned, Knights on horseback and Knaves are standing.

The backs are reversible. All card titles are in English (not as in other Lo Scarabeo decks titles in different languages) and the deck came with an additional  significator card.