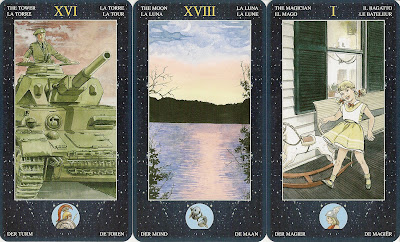 Notes:
The astrological attributions have been placed within a modern day concept set in a 1940s era world, rather than that of mythology or medieval times. In the Major Arcana, each card is assigned a sign or one of the planets. The seven traditional planets on the Major Arcana are represented by people in a family: grandparents, parents, son, daughter, and infant.

The zodiac signs are represented by scenes that bear an analogy to the astrological meaning of the signs. The Quadruplicates of the Signs are shown by the time of day seen on the card (Cardinal cards are daytime, Fixed cards are night, and Mutable cards take place at either sunrise or sunset).

The Minor Arcana is divided into decants (each sign is divided into three decants of ten degrees each). Each Decan is assigned a planetary ruler, so each card carries a planet and a sign. The pip cards use the images from the Major Arcana to depict various permutations of people and scenes (planets and signs) as outlined by the Golden Dawn.

Also unlike the Golden Dawn, this deck relies solely on the astrological attributions to delineate the cards, whereas the Golden Dawn used a combination of astrology, the Kabbalah, and Picatrix for most of its interpretations.

The Major Arcana have traditional titles, with the following exceptions: the Hierophant becomes the Priest and the Wheel of Fortune becomes the Wheel. Strength is in position VIII, and Justice in position XI. The four suits are Torches (Wands), Waves (Cups), Clouds (Swords) and Stones (Pentacles). The Court Cards are Princess, Prince, Queen and King.
Eingestellt von eno um 21:55