Tarot of the Journey to the Orient (Marco Polo Tarot) 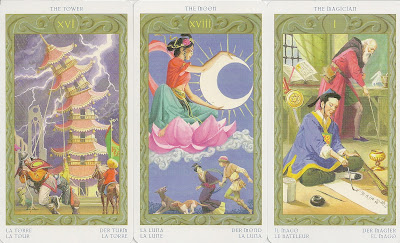 Notes:
This deck features scenes and dress described by the Venetian explorer Marco Polo. Each of the Major Arcana has two scenes one scene to represent the East, and one to represent the West. The numbered Minors alternate between Western and Eastern scenes. The top of the Minor Arcana cards feature the emblem of the given suit.

This deck comes with a small 64 page booklet in five languages. The minor arcana receive only brief two line divinatory descriptions while the major arcana are described in some detail.
Eingestellt von eno um 00:04