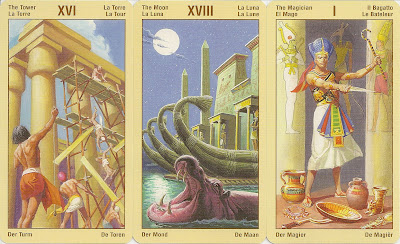 Notes:
The deck is set in a specific time frame, 1304 BCE to 1224 BCE, which is the life span of Ramses II. The Major Arcana show scenes from the life of Pharaoh Ramses II, and the Minor Arcana show scenes from the lives of ordinary people. Only two cards show figures from outside the period, The Fool, which shows Akenaton, and Judgement, which shows Moses.

The reversible backs show an extract from the Emperor card mirrored from the centre line. The deck comes with a LWB in five languages,  but there’s no mention of the depicted historical events save the names associated with the Majors.
Eingestellt von eno um 22:23