Notes:
The primary theme for the trumps in this deck is Bram Stoker's Dracula. Stoker’s biographer, Barbara Belford, among others,  believes that Stoker was familiar with the Tarot and based many of the characters in Dracula on Tarot trumps. Stoker was friends with two founding members of the Golden Dawn, the occult society that introduced the Tarot to England and he was a life-long friend of Pamela Colman Smith, who is included as one of the queens. 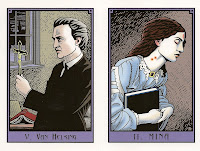 The Major Arcana titles remain the same, with the exception of Mina (The High Priestess), The Brides (The Empress), The Count (The Emperor), Van Helsing (The Hierophant), The Wagon (The Chariot), Fate (The Wheel of Fortune), and The Madman (The Hanged Man). Justice is VIII, Strength is XI. The suit titles are: Stakes (Wands), Holy Water (Cups), Knives (Swords) and Garlic Flowers (Coins/Pentacles). The court card titles are King, Queen, Knight and Knave. 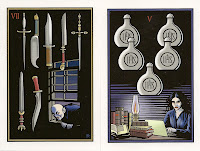 The Pips were illustrated with scenes derived from the story of Dracula, and imagery from vampire films and novels. On  the metal bottle in the suit of Holy Water is the monogram of Jesus engraved on the side .

The backs have a black border, surrounding a reversible “mask” of a vampire with fangs. The deck and box set came in a red cardboard box with a lift off top, that carries a picture of Dracula.
Eingestellt von eno um 00:01