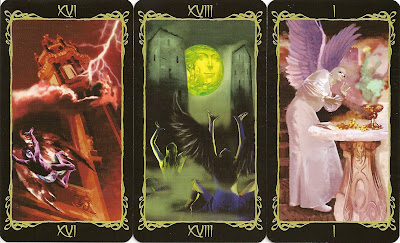 Notes:
"At the end of time, as the world spins slowly beneath a dying sun, the creator of that once glowing orb, broken by grief, turned his back upon his ruined creation. In opposition to their overlord the Dark Angels disobey his command and descend to walk the ravaged earth. Clothed in memories, garbed in flesh, they took their places upon the bitter landscape to partake in the last act of a cruel tragedy. Their self appointed task to succour the dying land and the last remnant of humanity, to lead them gently into the embrace of death and to cross with them the wasteland of their dreams. "

The art is computer generated figures to which an artistic overlay has been added. No words appear on the cards.

The Major Arcana have Roman numerals, while each suit is denoted by its standard symbol at the bottom and a number at the top. The Court cards have a symbol -for example a horse head for the knights- plus the suit symbol. Besides the suit symbols, each set has a narrow ribbon border: the Major Arcana in gold, Wands in grey, Cups in red, Swords in blue and Coins in green.