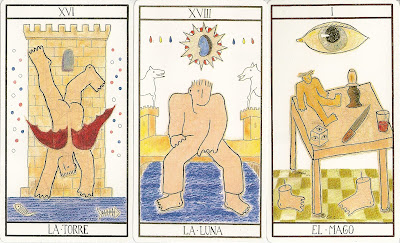 Notes:
Leopoldo María Panero (born Madrid, 1948), is a Spanish poet, commonly placed in the Novísimos poetic group. He has experiences with drugs from alcohol to heroin, to which he would dedicate an impressive collection of poems in 1992. In the decade of the 70's he is admitted for the first time in a psychiatric hospital. Nevertheless, his constant internments do not prevent him from developing a copious bibliography not only as a poet, but as a translator, essayist and even narrator.

This is a deck and book set. Each card is accompanied by a poem, a description and an interpretation. The main themes that Panero explores are alchemy, magic, psychoanalysis, homosexuality, madness and death.