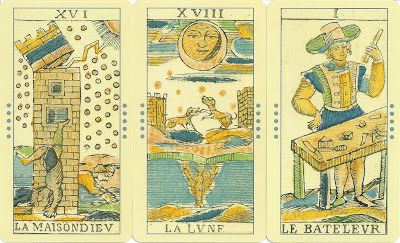 The facsimile deck with the misleading title Ancient Tarot of Bologna is an elegantly drawn Marseilles tarot created by Giacomo Zoni in the city of Bologna and first published in ca 1780 for export to Lombardy. It is not a tarot with Bologna Pattern. 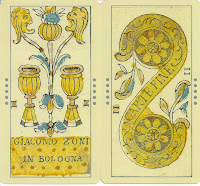 Even though the deck is ceated in Italy by an Italian for Italians, the card names are in French.

The first Lo Scarabeo edition from 1995 doesn't have the blue dots. The old edition is slimmer than the current LS decks. That's why they added the dots - to have the cards as wide as the standard LS are right now.

The woodcuts are simple and elegant, but the heavy-handed stencilled color obscures much of their detail.
Eingestellt von eno um 14:53