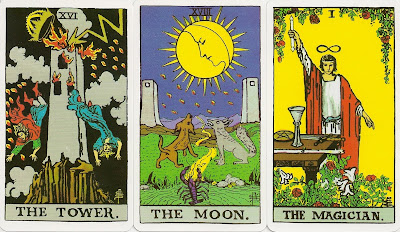 Notes:
The deck was originally published by Tarot Productions Inc., directed by Frankie Albano in 1968 and went out of print just a few years later.  U.S. Games Systems re-issued a facsimile deck from the original in 1991.

The Albano-Waite Tarot  is one of the many clones of the Rider Waite Smith deck. Like other clones, it has kept Pamela Colman Smith’s original drawings while changing the colors in a late 1960s style. The colors are bright with lots of purples and greens.

The background of the Minor Arcana are color-coded. The Cups feature light blue-green, the Wands are orange, the Pentacles lime green, and the Swords yellow.  The back is white with an abstract sun design in gold that is not reversible.

The images themselves are almost exactly the same as the standard issue RWS deck. One exception is the Temperance card, were an additional rainbow appears over the head of the angel Michael.
Eingestellt von eno um 17:12