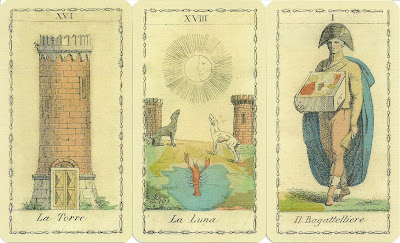 Notes:
Lo Scarabeo issued the facsimile titled Antichi Tarocci Lombardi first in 1995 as a twenty-two card miniature deck with square corners and  back design with a green-gold pattern and later as a full seventy-eight-card deck. The full deck has rounded corners, the first edition has a white back with red pattern, the second edition from 2000, which I have, has backs in  blue and white with the Sun card image.

The original  for this facsimile used the same black plates (except for the Death card) as the original for  Solleones Tarocco Neoclassico Italiano. This is  evidenced by the same scratches and etching anomalies appearing in both reproductions. The Lo Scarabeo edition is printed on a coated playing-card type stock, while the Solleone edition was printed on uncoated stock. 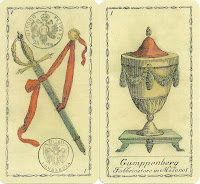 The Ancient Tarot of Lombardy  recreates the original Lombardy design that was inspired by neoclassical art. As such, the Major Arcana titles are in Italian, while the Minor Arcana pips bear no titles.