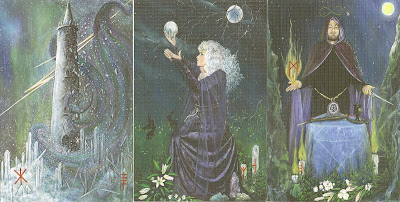 Notes:
The Wicca Moon Tarot was created by Shirlee who runs the Wicca Moon shop in South London. The Courts are Page, Knight, and a combined King/Queen, hence four cards less than a traditional deck. There is no explanation for why they are combined, as there is no LWB with this deck, but Chloe at Inner Whispers suggests the marriage or balance of the mature aspects of the suit. The minors tend to be nature scenes with the number of cups, wands, pentacles or swords positioned in the cards. The backs are not reversible and show a black cat on a pumpkin.

There are no borders, the number and title is written somewhere in the card. Two suits (wands, cups)  have female knights and male pages, the other two (swords, pentacles) male knights and female pages. The majors have traditional titles except there is a "High Priest" instead of Hierophant.

There is no LWB but  a sheet  that gives associations for the majors and court cards (  number, futhark rune, ogham rune, meaning and planet). The cards -packaged in a cardboard box-, the sheet and a little semiprecious stone came within a floral design bag.