Tarot of the Absurd 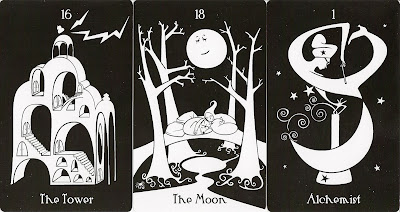 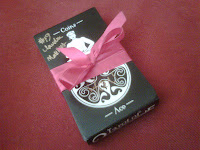 Notes:
The Tarot of the Absurd is a black and white interpretation of the occult tarot, drawn with vector graphics in Adobe Illustrator.  It is a limited edition of 600, mine was number 19. The cards come in a ribbon-tied sleeve. With each deck came a different signed card. Mine was the ace of coins.

The cards are borderless. The card back is a simple, reversible, black on white design. The suits are blades, coins, cups and sticks. The majors have traditional names except The Magician which became Alchemist. The Tarot of the Absurd came with two moon cards, which the artist explains so:

"When illustrating the Moon I thought, What is the most deceptive thing? My conclusion was that the most deceptive thing is a creator who brings something into this world and endows it with the faith that it will be loved and cared for and protected fully— then from within the realm of confidence of its creation, the creator becomes destroyer. I illustrated this as a mad mother consuming her own child: the ultimate deception. It is a disturbing image. ....

Upon becoming a mother myself, I find this image more and more disturbing and have found it necessary to deceive myself anew. Thus, I drew a second Moon. The second Moon contains not only the illusion that my creation will have the ability to wander into the wilds unarmed and sleep with the wolves, unharmed, but that I myself will be the perfect mother, able to produce such a miracle. This comforting illusion occurs when we refuse to take off the veil of deception and witness reality.....

Which Moon you choose is up to you. I leave them both in the deck."
Eingestellt von eno um 19:03