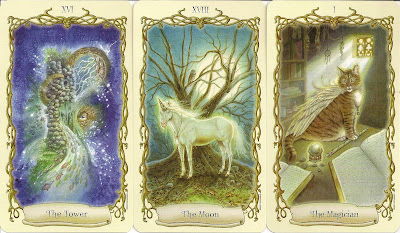 Notes:
Each card has a fairy or folk tale illustration  with an ornate border. Strength is VIII, Justice is XI. The suits are Wands, Cups, Swords and Pentacles.The Court cards are entitled Page, Knight, Queen and King. Designations, and major arcana titling are standard, except: the Hierophant is the ‘High Priest’, and the Devil is titled ‘Chains’. The most major change from the traditional is that Wands are associated with Air and Swords with Fire as always in Lisa Hunts decks.