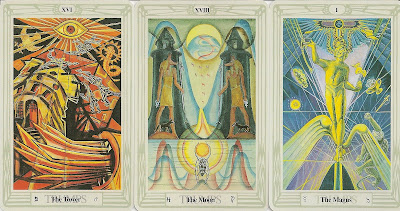 Notes:
Crowley referred to this deck as The Book of Thoth, and also wrote a book of that title intended for use with the deck. Crowley originally planned the Thoth deck to be a six-month project aimed at updating the traditional pictorial symbolism of the tarot. However, the project was to span five years, between 1938 and 1943. The deck was not published in the lifetimes of either Aleister Crowley or Lady Frieda Harris, the deck was only available as illustrations in Crowley's book from a limited edition of 200 copies -dated March 21 , 1944 - that Lady Frieda Harris herself had printed.

The first full publication -of inferior quality- was by Samuel Weiser  in 1969; There was another limited edition of 250  of equal poor quality in the same year by Ordo Templi Orientis / Simpson printing company. That edition was also known as the Sangreal One-Color-Tarot. The illustrations were photographed from  copy 105 of the  limited edition and printed on blue ink on the front and red ink on the backs. In 1977 Harris' paintings were rephotographed for a second edition. A further update with new photography took place in 1986, while this "Purple Box"- edition is based on a revision of the update and was first printed in 1996 and reprinted 2006. The deck comes in a standard cardboard box, showing the Two of Pentacles card surrounded by a purple border. Card suit ("Trumps" for the majors) printed in large, light letters, with card title (majors, courts) or keyword (minors) superimposed in dark, small-size type. Titles on the majors are flanked by a Hebrew letter on the left, and an alchemical or astrological symbol on the right. This is the only edition that still retains the inclusion of the three variants of the "Magus" card. The LWB was edited and updated by Lynn Araujo, and includes two essays written by Lady Frieda Harris, along with commentary by Stuart R. Kaplan.

Traditional titles are used for the Trumps (Major Arcana), with the following exceptions: Magus (Magician), Adjustment (Justice), Fortune (The Wheel of Fortune), Lust (Strength), Art (Temperance), and Aeon (Judgment). The four suits are Wands, Cups, Swords, and Disks. The Court Cards are Knight, Queen, Prince and Princess.  The minors do not contain illustrated scenes as in the Rider Waite Smith style. The  image on the card backs is that of the Rose Cross, surrounded by a white border.  Within this cross is represented all 78 cards of the Tarot. The artwork itself shows the influence of both art deco and projective geometry (Rudolf Steiner) instead of the usual straight or curved lines.
Eingestellt von eno um 14:29