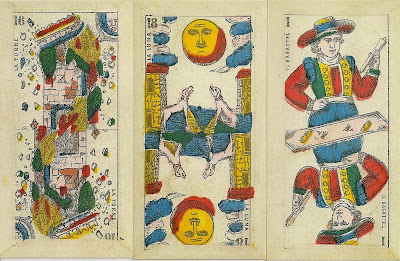 Notes:
This is a reproduction of a deck printed by Bordoni circa 1880.  The Ace of Coins contains an Italian monarchic tax stamp, 50 centesimi (valid mid-1880/1890s) and a stamp of the Milanese tax office dated 1890, but tax stamps don't give an exact date, because they may be applied years after the deck was first published.

This reproduction was printed as a limited and numbered edition of 2000 by Il Meneghello. There was another edition of the same deck - also by Il Meneghello - named "Tarocco Lombardo (a doppia figura)" that one is limited to 1500 copies.

This deck it is one of the earliest known to have double figures (doppia figura), or mirror reflections of the images on the cards. The back design shows a lancer on horseback.

The original was stencil colored lithography and has the backs printed on a separate sheet and glued to the cards, with the edges wrapped around the front. This edition also reproduces the backing paper edges on the front.

The cards came in a solid cardboard box with a wax seal of Il Meneghello.
Eingestellt von eno um 18:21