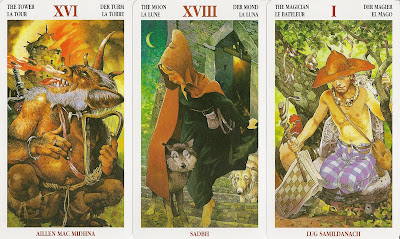 Notes:
The Celtic Tarot is illustrated by two different  artists. The Major Arcana were created by Gaudenzi in a style that is found in book illustrations. His work appears to be pen and ink colored with watercolors. The Minors Arcana are by Tenuto and recalls comic book art. The Majors were originally released in 1994 as an art deck under the name of Tarochi Celtici, and the Minors were added some years later and the deck re-released.

The Major Arcana's images are from Celtic folklore and fairytales. The Minors are based on the Rider Waite symbolism with the suits being attributed to Irish tribes. Wands represent the Fomori, Pentacles are the Tuatha De Danaan, Swords are the Ulaid, and Chalices are the Fianna. The deck attributes Wands to Air and Swords to Fire. The Court Cards follow the traditional pattern- Knave, Knight, Queen King.

The deck comes with a LWB that briefly explains the legends associated with each Major Arcana card.