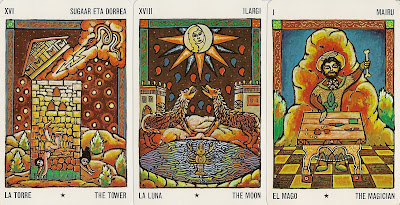 Notes:
Angel Elvira drew the designs from the traditions of the Basque people, who inhabit the western pyrenees on the Bay of Biscay.

The figures in the deck are dressed in traditional Basque costume. The colors red, yellow, green and turquoise predominate.Titles on the cards are in Basque, Spanish and English. The deck has two extra title cards, which show a hand between two birds, with four faces below representing the four elements. The Minors are plain pips. The deck came in a lidded cardboard box with a lwb.