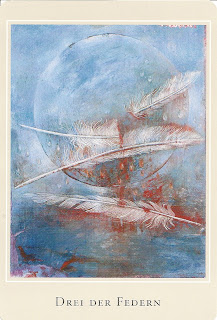 Notes:
Margarete Petersen is a Berlin based painter who began painting Tarot cards in 1979. It took her about twenty years to complete the deck.

There are feminine undertones in Margarete Petersen's imagery but there is no apparent fundamentalist feminism.

Some of the Major Arcana have been renamed: The Magician/Magic, The Chariot/Chariotess, The Hermit/The Crone, The Hanged Man/Trial, Temperance/Mediatrix, and Judgment/Renewal. The Court Cards are Mother, Father, Daughter, and Son. The suits are Flames, Cups, Feathers, and Coins.