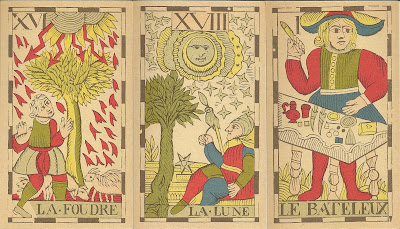 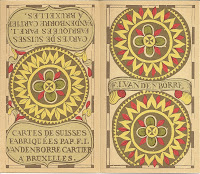 Notes:
This deck is a reproduction of the Vandenborre tarot published in Brussels, Belgium, in 1780. It is also called the Flemish Tarot by Vandenborre.

The Belgian tarots were also known as "Cartes de Suisses", although no examples made in Switzerland were known. The order of the trumps is the same as in the Tarot de Marseille, and a number of the designs are also similar. Other cards (Tower, Sun, Moon, Star, World, Hanged Man) are different. Pope and Popess are replaced with  “Bacchus” and the “Spanish Captain Fracasse” (a figure from the Commedia dell’arte).

Probably  it is a hybrid pattern, combining some features of a Bologna-like Italian pattern with the Tarot de Marseille pattern, with which it must have overlapped geographically in the 17th century. 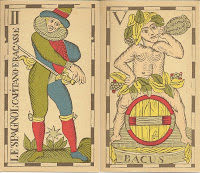 The graphics is less detailed than the Jacques Vieville Tarot.  The cards are colored in red, blue (light and dark), green, yellow and flesh coloured. Originally printed from woodcuts and coloured using stencils,the colour for the Carta Mundi edition  seem to have been added as process colour.