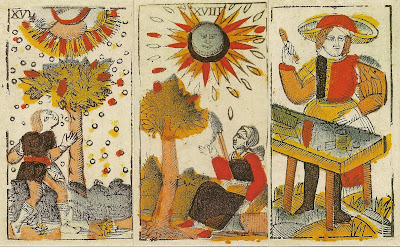 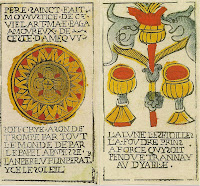 The deck  was made around 1650 in Paris by cardmaker Jacques Viéville. Many cards do match the cards in the Tarot of Marseilles tradition but the Tarot of Jacques Viéville seems to also be related to  the "Belgian Tarot", the "Tarocco Bolognese", and The "Ferrara" Tarots.

The major arcana are not named, but the names can be guessed from two cards, the Ace of denier and the Two of cups. Some of the trumps (Tower, Sun, Devil, Hanged Man, Star, Moon) have greatly different imagery from the Tarot de Marseille and contrary to the Viéville tarot, the Marseille tarot traditionally represents the VII arcane as the Chariot and the VIII arcane as the Justice. 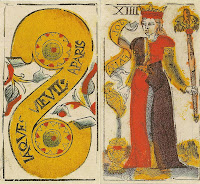 The stamp of the Bibliothèque Royale, which had been added by the Library to avoid theft, has been removed electronically.
Eingestellt von eno um 13:30