Baphomet - Tarot of the Underworld 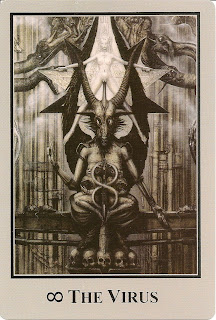 Notes:
The Baphomet Tarot is a collaboration between the Swiss artist H.R. Giger  and the occultist Akron (C.F. Frey). Giger painted the images between 1973 and 1992 (not as tarot cards) and Akron chooses from Giger's paintings those, which fits for the tarot cards. Akron also wrote the book  that came with the cards.

The first edition had 22 cards the later editions have an extra card "The Virus". Backs are not reversible.