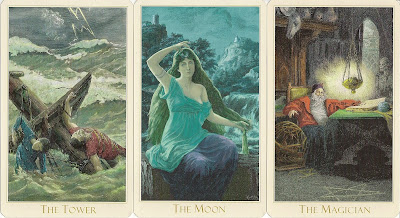 Notes:
The Victorian Romantic Tarot is based on original 19th century engravings from European and American artists both famous and forgotten. Those original Victorian engravings were skillfully modified to become Tarot scenes with a Rider-Waite foundation, but are by no means clones.

This is the second edition of the deck.  The original deck was way back in 2006 (and there was a limited Gold Edition in 2007), this version is from 2012 and has completely reworked the cards, with many changes in images . The first edition standard lacks the second’s gold gilded edges. 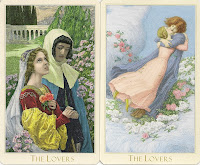 The majors are not numbered (allowing us to place Strength and Justice wherever we choose). The deck came with a title card displaying the Page of Cups, a LWB and the new extra Lovers card.

On the new Lovers Card based on an engraving of a picture by Max Švabinský a couple is shown in an embrace, it contrasts sharply with the original Dante and Beatrice card.