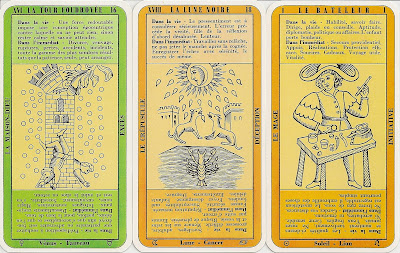 This deck contains the drawings of the Tarot of Marseilles, reproduced in smaller black-and-white line images, as well as comments, in direct and reversed reading, the astrological signs and the days of the week.

The title in French appears at the top of each card. The number appears in Roman numerals, top on the left, and Arab numeral in top on the right. Titles and numbers and symbols appear all around the border of the cards.

The order of the cards is traditional Marseille-style; Justice is 8 and Strength 11.  The Fool is numbered 22 and placed at the end of the Major Arcana instead of the beginning.

Along with the Arista Tarot deck there is a small instruction booklet, again in French only.﻿ It doesn't say much on the meanings of the cards, nor does it explain why some cards have non-standard titles,  but it describes several possible  layouts.

The cardbacks of my edition are a simple pattern like playing-cards have (the first edition had a fleur-de-lis pattern in gray on a beige background ).

The four suits of the minor arcana are "Batons", "Coupes" (Cups), "Epees" (Swords) and "Deniers" (Coins). The major arcana follow the Marseilles pattern, albeit unusual alternatives for some of the card names, including: "Les Deux Routes Entre Le Vice et La Vertu" (the Two Choices Between Good and Evil) for VI. The Lovers; and "Le Sphynx" (the Sphynx) for X. The Wheel of Fortune. The Star is called L'Etoile des Mages and the Tower is called La Tour Foudroyee. The suits have their borders coloured Baton - purple, Coupe - orange, Denier - blue and Epee - Torquoise. Majors are in various colours.


I pondered quite a while on where the name “Arista” hails from. In German and Spanish “Arista” is the biological term for the hair- or bristle-like appendage on many grasses, wild rye and emmer. The English term would be “awn”, the French word for it is “areste”. Maybe this tarot is named “Arista”, because it is spiked with keywords and symbols like the grasses with awns. On the other hand it could just as well be that Mr. Simon was a fan of the Arista, a French automobile which disappeared from the market in 1963, around the time this tarot was born...
Eingestellt von eno um 23:51