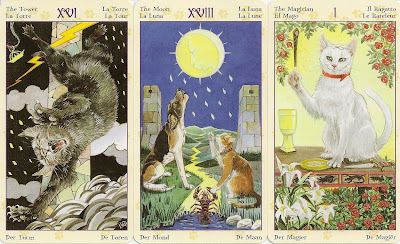 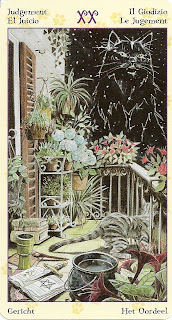 Notes:
Magdelina Messina is the pseudonym for Barbara Moore, Lola Airaghi is a comic artist, which studied at the Scuola del Fumetto di Milano. She drew her first comics for Il Corrierino and Blue. She then became an artist for Bonelli, where she worked on series like "Brendan" and "Legs Weaver."

Measuring approximately 4 ¾ x 2 ½ inches and framed with an cream paw print border, the Tarot of Pagan Cats follows RWS Major Arcana names. The suits are Chalices, Pentacles, Swords and Wands, with the Knaves, Knights, Queens and Kings Court designation (although the LWB calls the Knaves "Pages"). The titles appear in 6 different languages and the numbering uses Roman numerals for the major arcana and Arabic for the minors.

Like the RWS the suits are elementally coded, Chalices are set in watery locations, Wands in deserts, Swords show high mountain tops and wide skies while Pentacles are set amongst plants, trees and rolling fields.  Sometimes pairs of cards are connected: