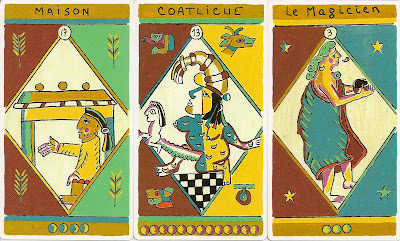 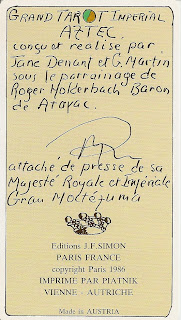 Notes:
This deck is not a tarot. It has 52 numbered cards and one unnumbered card and a card that has on it the signature of the attache of Montezuma. The cards were inspired by Azteque religion and manuscripts of the fifteenth and sixteenth centuries.

There are four series of numbered cards. The first eight cards, bordered in blue and brown, are for the eight social classes. Cards 9 through 14 and the unnumbered card, are bordered in yellow and brown and indicate the planetary goddesses of the Azteque. The cards 15 through 34, bordered in green and brown, depict the 20 figures found in Mexico on a carved stone which is called "The Azteque Calendar". The last  eighteen cards are bordered in ocher and brown correspond to eighteen periods of the year.

The balls at the bottom of the cards count up to thirteen, which is the number of days in the lunar cycle, and then start over at one.
Eingestellt von eno um 15:57