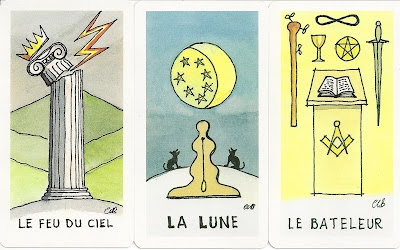 Notes:
The Major Arcana are not numbered and with traditional French titles.  For the Pips, the card number is in black at the top - there are no titles, but the cards do contain pictures. The Court Cards contain no numbers and no titles.  They are categorized as King-Knight, Queen, Prince, and Princess. The Prince and Princess simply are marked P and have a Venus glyph after the P for Princess and a glyph of Mars after the P for Prince. The Queen is marked "Q" and the King-Knight, "Kt." They show no humans but only the emblem of the suit.

The deck is mainly based on cabbalistic principles, the suits correspond to Atziluth, Briah, Yetzirah, and Assiah.

The back of the cards is reversible and shows a white background, with the square and compass glyphs on the top and bottom of the card in black. On one side of the box is printed ITNOTGAOTU, those letters stand for "In The Name Of The Great Architect Of The Universe". The LWB that accompanies the deck presents the cards by Kabbalistic Path.
Eingestellt von eno um 23:23