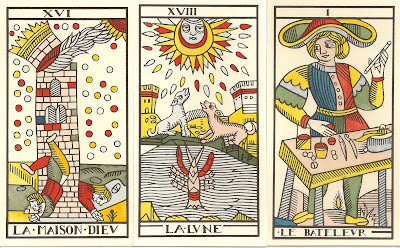 Notes:
In 2002 Flornoy recreated a majors only version of the "Jean Dodal Tarot". It is not a facsimile, but  rather a redrawing. The cards are coloured by hand using stencils. On his website Flornoy describes in detail the process of coloring this deck .

The deck came in a cream colored box with a paper band around the cards. It was issued in a limited edition of 650, mine was number 455.

The card number, in Roman numerals, is placed at the top of the card,  the card title at the bottom of the card. FORCE and LEMONDE carry the notation "F.P.LE.TRANGE", which means "Fait Pour L'Etranger", or "Made for Export", which has to do with the French Royal tax system at the time.

The Payen and the Dodal decks are so similar that a number amongst those interested have suggested that they were carved by the same hand, or at least in the same workshop.  Upon the Moon card of the Dodal deck, below the right-hand dog’s tail, on the dark green background above the waters, are clearly the initials of Jean Payen (I.P.).
Eingestellt von eno um 14:10