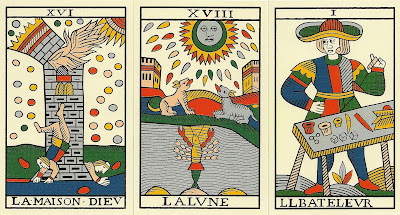 The "Jean Noblet Tarot", originating in Paris, c. 1650, is the oldest known tarot of the "Marseille" tradition, . The only existing copy of this deck is preserved in the French National Library in Paris. It is a nearly complete deck, missing only the Six through Ten of Swords. This 78 card edition is a restoration done by the French Tarot historian and artist Jean-Claude Flornoy. The missing cards have been recreated by Flornoy.

Both the Two of Cups and the Two of Coins show the name and city of origin for Jean Noblet. The shield on the Chariot shows  the initials "I.N." for the engraver - Jean Noblet.
Eingestellt von eno um 12:38