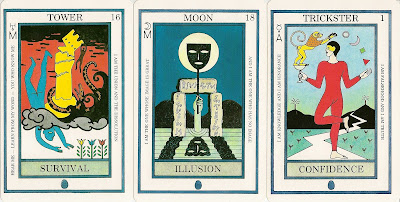 Notes:
John Astrop is an astrologer and writer, and Caroline Smith is a painter and tarot reader. The Elemental Tarot fits a system of astrological combinations to the 78 cards of the Tarot. The card designs are vertically divided at the point of the golden section.

There are several symbols printed within the borders of each card. The suits are renamed. Earth refers to pentacles, air to swords, fire to wands, and water to cups. The corresponding elements are symbolized at the bottom by one of five geometric shapes. These five shapes are actually the Tattwa symbols. The Trumps are noted by an egg shape which corresponds to Spirit, the suit of Fire by a red triangle, Air by a blue circle, Water by a silver moon, and Earth by a green square.

Each card is also assigned a pair of planets which is meant to give additional meanings. This system of correspondences does not use the twelve zodiacal signs, but instead uses the ten planets, the midheaven, the ascendant, and Moon's node. The total pair combinations possible equal seventy-eight.

The Major Arcana are titled at the top, and have a descriptive keyword at the bottom. Some retain their traditional titles, such as The Sun, The Star and The Fool, others have been renamed, the Magician, for example,  is called the Trickster, it is the Pope instead of High Priest, and Aeon instead of the World. Within the side margins are lines from a Gnostic poem titled The Thunder, Perfect Mind. This text was one of several documents comprising the Nag Hammadi discovery in 1945.

Each Minor Arcana card is titled with an elemental based keyword and includes the name of a god or goddess from a variety of cultures at the bottom. The symbols found in the lower left margin of the Minor Arcana are Egyptian  hieroglyphs.

The court cards are Father, Mother, Son and Daughter and correspond to the traditional King, Queen, Knight and Page.

This is the first edition from 1988, which has sturdy slipcase packaging which houses a boxed set of cards and a hardbound book.The later edition by St.Martin'sPress in 1999 is of inferior quality.
Eingestellt von eno um 01:59